Carpal Tunnel Syndrome: What You Can Do About It

If you ever experience pain, tingling, or numbness in your hand and fingers, specifically the thumb, index, and middle fingers, then you may want to get checked for Carpal Tunnel Syndrome. CTS is a fairly common problem resulting from pressure on the median nerve by the transverse carpal ligament, a broad band of tissue that wraps around the wrist. This compression is most often the result of repetitive movements of the wrist and fingers such as typing, assembly line work, sewing, etc. It also seems to show up alongside other conditions such as hypothyroidism, rheumatoid arthritis, diabetes and is even a common side effect of pregnancy. 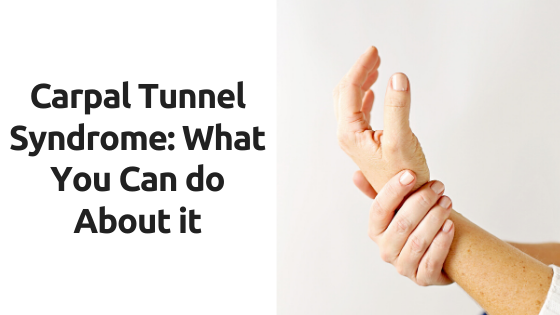 While we most often associate this pain, tingling, or numbness in the wrist and hand as an obvious sign of compression of the median nerve in the wrist, i.e. Carpal Tunnel Syndrome, it’s important to also rule out other possible causes, including nerve compression at the neck, shoulder, or upper arm. You see, this median nerve is a branch of a much larger nerve coming from the spinal cord. So, while passing around and through the numerous structures on the way to the fingers, it can become compressed at any point, resulting in the same symptoms as Carpal Tunnel Syndrome. This is why it’s so important to get a proper diagnosis so the real cause of the symptoms can be treated effectively.

Once CTS has been diagnosed, there are a number of movement and position modifications that can help take the pressure off the nerve and ease your symptoms.

Swelling is a big culprit in Carpal Tunnel Syndrome. The pressure on the nerve creates inflammation, resulting in swelling that only adds to that pressure. Because of this, your doctor may recommend anti-inflammatory medications or even steroid shots in severe cases, to reduce the swelling. Oftentimes, just getting the swelling under control can take enough pressure off the nerve to let the healing process take place and ease the symptoms greatly. If these modifications and medications aren’t quite doing the trick, the next step is often a recommendation for physical therapy to begin a regimen of exercises and stretches that can help. If this still doesn’t resolve the issue, the next step is often surgery. This can be done with an open incision or endoscopically, but either way, the most common surgical procedure involves cutting that transverse carpal ligament to allow more room for the median nerve to pass through without pressure.

While Carpal Tunnel Syndrome is a fairly common condition, that doesn’t mean you have to suffer from it. Use these tips to ease any current discomfort and hopefully prevent any more!